Felicia is a half-elf from the Mountain Town of Vale. As a Thunder Chaser she’s an interesting mix of an athletic build, needing a layer of fat to cushion blows and deflect damage from Raptor claws. Due to this she isn’t as noticeably toned, but she’s strong and still maintains a figure. She has one noticeable scar on her left shoulder, a Raptor mark. Felicia stands at 6’2" and weighs around 210 pounds.

She usually wears Tribal furs, visible mid drift, sandals, and has her black hair loose and near shoulder length.

Nali is a Raptoress born in Vale, she has distinct coloration around her eyes, a dark red. She’s a dark green colored Raptor with an attitude, and has taken more than her fair chunk out of Felicia over the years.

Felicia is the team captain for the Vale “Veiled Claws” Thunder Chaser team. Vale being a mountain town, she’s is a herbalist, climbs mountains to collect hard to get herbs, and with her Raptoress Nali she’s also a part time delivery service. Nali is known for her endurance and climbing skill, living in a mountainous area she handles rock and cliff like a fish handles water.

Felicia and the Claws landed second place in the 999 CE Thunder Chaser national tournament. Losing the last round of Blitz herself, Felicia took it hard because she lost her first Raptor Yik-yik in that last round. She’s a rather serious person when it comes to business and games, but she’s very relaxed when her wallet or pride aren’t on the line. Felicia is a half-elf with a visible scar on her left shoulder from when Nali was young and untamed.

“Life has given me nothing but crap, I thank it for the fertilizer.” -Felicia 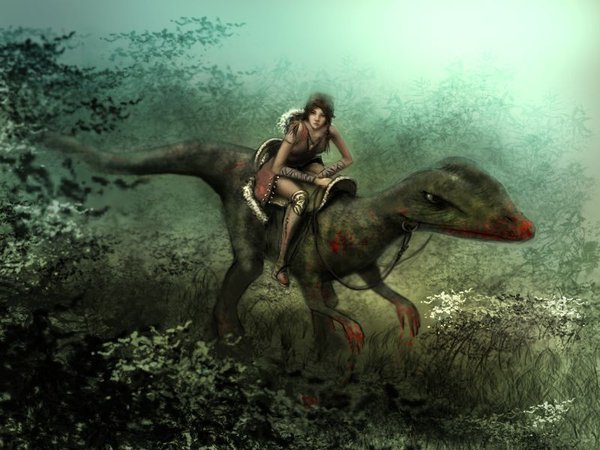