Gil “Gilly” Aschendale is a young wood elf/weretiger shifter and fighter from the island of Kana. Her name means “star, bright spark.” *

Physical Description
Gilly has an athletic build, tan skin, and a square jaw. Her eyes are amber and up-turned; her hair is thick, auburn, and wavy, reaching halfway down her back. She wears her hair in a low bun during combat but otherwise prefers to leave it loose. Gilly sports artisan combat Automail in the form of two legs, a right arm, and a chest plate. When shifted, her eyes become cat-like and her teeth grow into powerful fangs. Gilly dresses conservatively in muted colors and somewhat rough-hewn clothing, always wearing pants and high-necked shirts. Since she was unable to fit sleeves over her arms until recently, all of her shirts are sleeveless, and she dons a gray wolf skin cloak to cover up. Her weaponry of choice is a longsword and shield, but she is currently also experimenting with a catchpole.

Early Life (907 CE – 922 CE)
Gilly was born to Dolenleth and Estellon Aschendale in the Glade of the Crescent Moon, where she was cared for by her parents and her maternal grandmother, Gwathra, growing up on the stories of their adventures. As a child, Gilly had a lively, outgoing personality. She made friends easily with people of all ages as her sincerity and sweetness made it hard for people not to like her. Her parents raised her with their selfless, people-first value system and trained her in basic archery as well as in hunting. Gilly’s father taught her about her lycanthrope heritage and helped her learn to control her shifting as she matured; her mother led her in music lessons on the pan flute, passing on the songs of Gilly’s late maternal grandfather, Linnathon. Gilly’s grandmother was an odd mixture of aloof and loving; she frequently disappeared on mysterious missions but was rather indulgent when she was around, sometimes bringing Gilly trinkets from her escapades.

The Attack and Its Aftermath (922 CE – present)
While out on a hunting trip, Gilly and her mother were ambushed by a group of anti-shifter extremists. The two survived, but Gilly sustained severe injuries and had to undergo massive reconstruction, including the installation of Reforged limbs crafted by a young Marta “Vel” Velasquez. (Short short: Nightmare Medicine.) The attack imbued Gilly with a sense of fearlessness in combat, inspiring her to train as a fighter, and was the start of a close friendship with Vel.
Unfortunately, because of her new and unnatural prosthetics, a large part of Kana’s heavily druidic community turned on Gilly. Many of her old friends distanced themselves from her; even adults would whisper things about her when they thought she was out of earshot. Gilly’s family has done their best to shelter her from this discrimination; the significant hand that they had in rebuilding Kana has given them considerable sway over the community, but they can only soothe so much of the unease and superstition. (Short story: Post Traumatic. Short short: Feinting Match.) 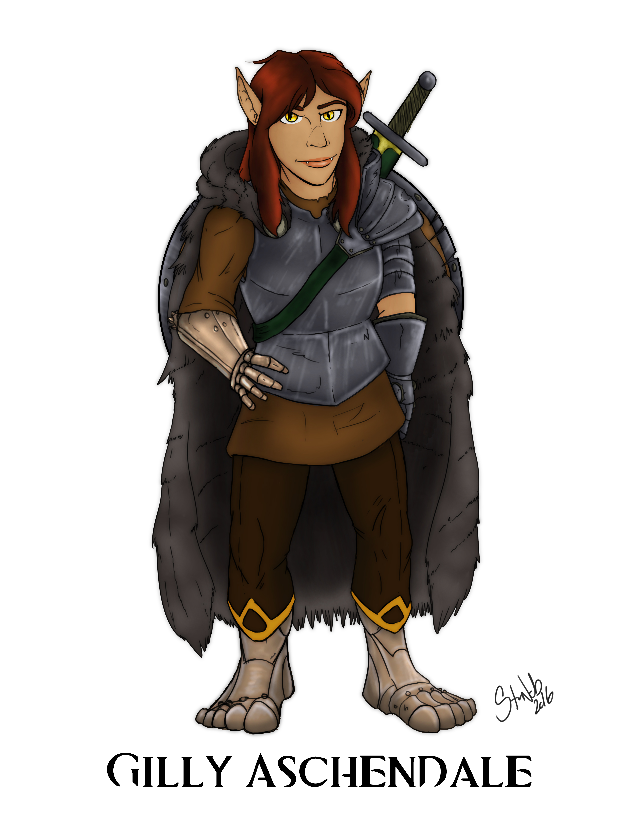