Gwathra Meliamne is a middle-aged wood elf widow who lives with her daughter and son-in-law on the island of Kana. Her name means “to veil or obscure.”

Physical Description
Gwathra is 5’8" and about 125 lbs. She is toned but sleek, built for both archery and stealth. Gwathra has tan skin, elegant features, and dark, doe-like eyes. Her hair is close-cropped and medium brown. She dresses in darker clothing and often wears a hooded cloak to hide her face.

Agent of The Eye (675 CE – 725 CE)
Gwathra spent the first of her young adult years working as an assassin for The Eye. The organization infected her with the killer spores of a plant called Bloodroot and trained her to use her blood as a weapon. Gwathra became so adept at her job that she earned a legacy as The Bloody Kingslayer.

Attempted Retirement (725 CE – 800 CE)
During her career as an assassin, Gwathra met and fell in love with a fellow wood elf named Linnathon Meliamne from the Wild Lands village of Dartha. Gwathra retired from The Eye, married Linnathon, and moved to Dartha with him. Around 750 CE, she gave birth to their daughter, Estellon. Gwathra elected not to indoctrinate her daughter with the Bloodroot and instead taught her to be a skilled archer and hunter.

The Cleaners’ Attack (800 CE – 846 CE)
Gwathra’s past eventually caught up to her. A splinter group of The Eye known as The Cleaners was on a mission to erase the kingdom of Elysium from time itself; they wanted all knowledge of the place destroyed. Since Gwathra had once traveled to Elysium, she and anyone she may have discussed it with needed to be eliminated. The Cleaners burned Dartha to the ground while the clan slept, capturing any survivors (with the exception of Estellon, who was hidden in the woods) and subjecting them to various forms of torture. Gwathra and her husband were given over to demons, who eventually killed Linnathon. (Short short: Smoke and Fears.)

Starting Over (847 CE – 877 CE)
See Season 2 Timeline.
After the death of The Patron and Howl‘s ascension, Gwathra returned to adventuring with her daughter and Estellon’s friends in Chakai. In particular, Gwathra and Estellon were finally able to focus on tracking down and eliminating The Cleaners. With their mission fulfilled, they took Dolenleth and all their fellow mentally stable surviving clan members on a pilgrimage to Dartha, where they paid their respects to the souls who were finally able to rest.

Return to Kana (877 CE – present)
With The Cleaners finally gone, Gwathra followed Estellon and Dolenleth back to Kana to help them rebuild the ravaged island. Estellon and Dolenleth married, taking on their adult names, and in 907 Gwathra became a grandmother. When Estellon and Gilly were kidnapped by an anti-lycanthrope hate group, she and Dolenleth coordinated a particularly bloody rescue, wiping out the extremists entirely.
Today, she does her best to be an involved part of the family, continuing to look after her daughter and granddaughter in an attempt to make up for lost time. 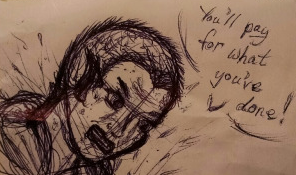